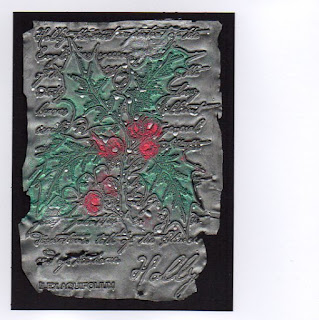 Playing with the soft form relief paste and mica powders, and the large image from the
holly script set of stamps.
I dusted the stamp with mica powders in red and green before covering the stamp with silver soft form relief paste and leaving it to dry. The mica is held in by the paste, and doesn't rub off.
Very simply peeled the pste off and mounted it onto black card, then onto a 15x15cm white card blank
Posted by veronica at 07:00 No comments: 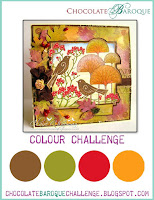 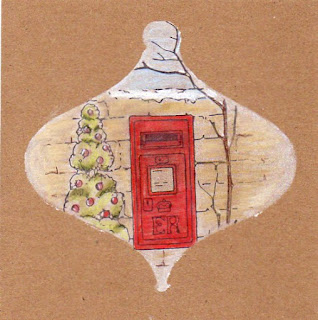 The new colour challenge for Chocolate Baroque features lovely autumnal colours, so to be awkward I did a Christmas card......
I used a bauble design stencil, sponging white pigment ink through it on a kraft card base. Once the pigment ink was dry, I stamped the new single Christmas stamp Christmas post through the aperture using black memento ink- should have used a stamp positioner, then the postbox may have been straight! (or maybe not, as I don't tend to get on very well with those gadgets!)
Coloured image with my favourite watercolour pencils and a water brush, with white sharpie pen highlights for the snow. 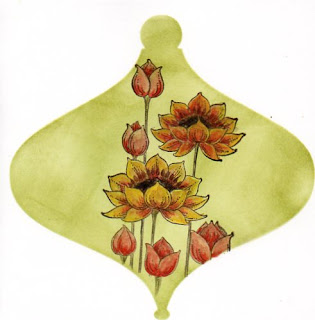 I used the same stencil, this time on white card with peeled paint distress ink for the bauble for my second card. Stamp this time is from the new set floral notes, again stamped in black memento ink and coloured with watercolour pencils - and again with a squiffy image! My excuse this time is that I was trying to get as much of the stamp in as I could - having it straight would have lost the smaller buds............
Sorry in advance, but I am becoming quite addicted to this stencil, so you will probably be seeing more of it that you would like.................... 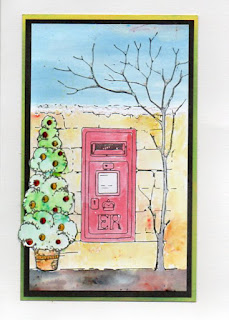 Good morning, even if it is cold and rainy here, hoping you have better weather!

I have the threatened card using brusho powders and the new Christmas Post stamp.
A very simple card,stamped with black Versafine onto white card, and painted with brushos. The tree was stamped a second time onto a scrap of card, coloured and cut out, then decoupaged onto the original image. The baubles were dotted with glossy accents, and glitter added along the top of the wall and to the bare branches of the tree.
Matts are black and gold mirri, and the base card is 5"x7" white. 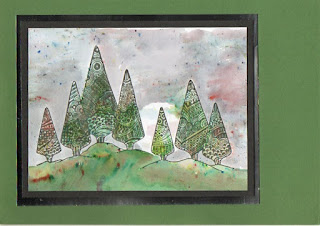 For the second card I went for a night-time effect, and a non-Christmas feel. The stamp  may be called Christmas tree tangle, but it is not an obviously Christmas image and could be used all year.
Stamped in black versafine again, and painted with brushos, using just grey and leaf green, with the moon masked off. Matts are black and silver mirri card, and the base card is A5 green. 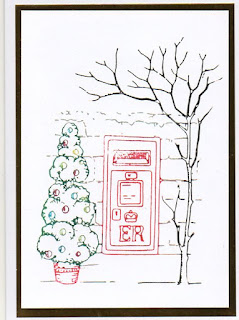 Today I have two versions  of a very minimal card using the new Christmas Post single stamp from Chocolate Baroque to show you - the brusho version will follow!

The first one is coloured with water-based marker pens. The mount is gold mirri card, which is showing very dark on the scan, but it was too dull to take photos by the time I finished this.
This one is on a 5"x7" white card blank. 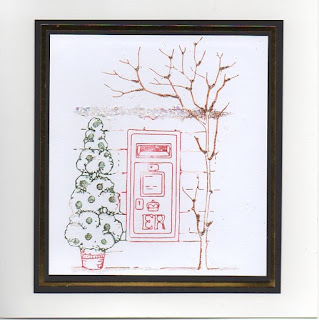 For the second I tried using small ink pads to colour the stamp - it's not as successful as they were square, and teardrop shaped ones would have been easier to use.
This was cut down to a rough square, and glitter added. Chunky flakes for the snow on the wall, brown glitter on the tree branches and a finer clear glitter on the baubles and ground. Having done it, i think it was a bit of a glitter overload, it would have been better with just the 'normal' glitter.
Matts on this one were black, gold mirri and more black, and the base card is white 7" square.

I used the same method to create a tag, just inking up the christmas tree and the using a water brush to draw some of the colour out. . The baubles were coloured with marker pens and glossy accents. 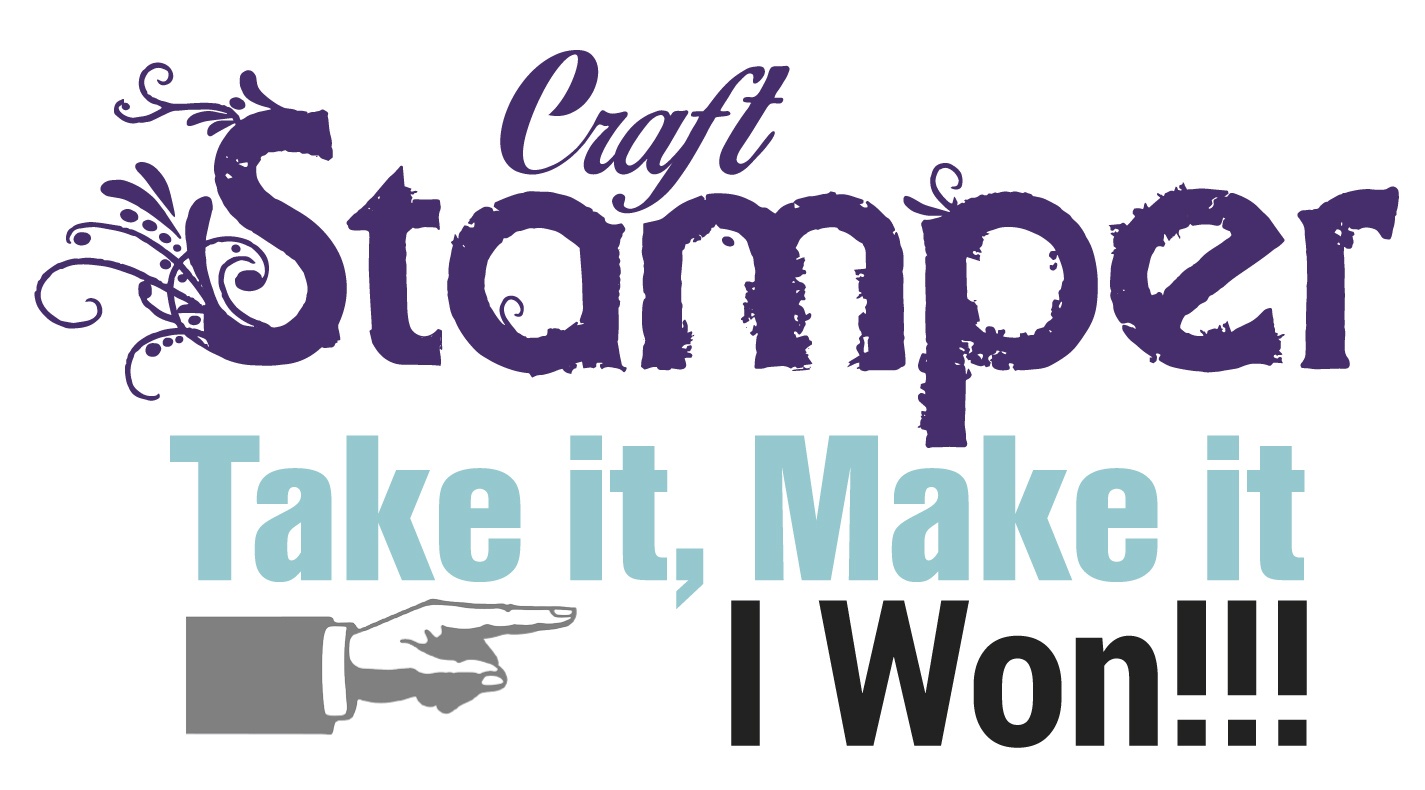 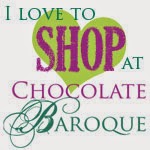